Spanning the Gap - The I-80 Walgreen’s

In 1972-74, Highway US 40 through Reno was replaced by Interstate 80, a freeway. The freeway was carved through a section of north central Reno in a kind of man-made canyon. Across that gap an ”air rights structure” was built – just a concrete and steel floor plate that spanned over the freeway lanes covering a little over an acre. This floor plate was intended to be the base of a new ‘mid-rise’  hotel casino, with all the attendant super heavy steel columns and rigid structural geometry ‘driven’ by the freeway alignment.

Fast forward  to 1998: The air rights structure is still an undeveloped “pad”, corroded and deteriorating after exposure to the elements for 25 years. The Nevada Department of Transportation is seriously considering demolishing the structure. However, one developer had a vision to repurpose the pad as a Walgreen’s drug store. BJG was hired to design repairs and upgrades to the pad as well as adapt the prototype Walgreen’s design to mesh with the structural limitations of the pad. As it turns out, the technical issues were the least of our problems.

It seemed nobody thought that the pad should be a drug store. The various City of Reno departments and politicians would have preferred an office building, a hotel, a casino, a visitor center , a coffee shop and book store…. ANYTHING but a drug store.   The neighborhood was OK with the Walgreen’s. It represented the only food and drug shopping source near the University for nearly 2 miles and because anything would be an improvement over the trash-collecting, rotting pad structure.  But no one was enthusiastic. Finally, after months of discussion, we had a direction from the multitude of public interests: The Walgreen’s would be OK but the architecture had to “knock their socks off”.

A new state law had to be passed to allow the building to have signs – normally, advertising signs are prohibited in a freeway easement – and Walgreen’s was, naturally, interested in having signs on the building. Limitations on the size and number of signs annoyed our client since they wanted maximum exposure.

City landscape code required the site have planting: our site was a concrete deck, devoid of soil and water…no matter. We settled on an innovative ‘self-watering’ pot system that ultimately failed due to vandalism and continuous theft of the plants.

The nearby 114 year old university insisted that this new neighbor, albeit riding over the freeway be clad with brick and ivy. This design approach was dubious given the nature of the ‘weak’ concrete pad we had inherited. This idea was untenable.

We architects pondered the possibilities. With any solution, a substantial truss would be involved that suspended the building between the super-heavy, wide- flange  steel columns aligned between freeway lanes.  With these large trusses, the building itself would essentially be a ‘sign’. Given the fact we were spanning a freeway, a railroad bridge and rail station design concept was arrived at. This historical basis was praised by the City Council and the developer for reflecting a bit of local history while staying original and giving the new drug store a prominent architectural presence. The design was well received and the Planning Commission voted approval during our first hearing. We were off to construction documents…..or so we thought.

On the same day BJG received approval from City Planning,  our client received a call from Walgreen’s upper management: the trusses of the railroad building looked ‘old’ – and they insisted on a modern geometry similar to the massive trusses supporting the roof at the Kansas City Kemper Arena.  Despite serious objection from the city, university, and Redevelopment Authority we re-designed the building around triangular, tube style trusses and a modern theme of modular, glossy materials.  After two more visits to the Planning Commission and ultimately to the City Council – the design you see today was approved.

After decades of neglect, the existing concrete and metal deck ‘pad’ was in bad shape and had to be replaced. All of the steel was cleaned, new concrete and metal deck placed: concrete was poured day and night over the freeway. ‘Inside’ the bridge fireproofing was applied to the steel and to the bottom of the deck by workers crawling under the deck in what can best be described as space suits. New lights were installed for the traffic. No cars were damaged during this tedious work and the freeway continued to flow.

The building’s signature trusses were designed to be field assembled with single bolt connections at the site. After a final circumference weld, the trusses were lifted into position using two cranes spaced one city block apart, spanning the freeway. The building roof and walls are literally suspended from the trusses since the ‘pad’ was never intended for building loads.  A lightweight wood subfloor, completely filled with insulation below, was built to level the floor as the pad slopes approximately 1% (28 inches!) from north to south. Since the pad is relatively ‘weak’, vehicle size is restricted to passenger cars...in a serious way… heavy tube steel barriers have stopped large cab type vehicles ‘in their tracks’….despite copious signage.  Emergency vehicle access was approved by the city going in the wrong way on a one-way street to reach the main entrance by fire trucks and ambulance service.

In November 2001 the building was well on its way to completion when a dry-wall  heater started a propane fire in the pharmacy area of the new store. The resulting heat and smoke  from this ‘blow torch’ type fire ruined all the wiring, aluminum windows, roof top mechanical units, and melted a quarter of the roofing (including steel roof framing).  Interestingly, the fire demonstrated that the wood subfloor’s insulation fill limited the burned floor area to a circle approximately 12’ across. In addition, a single draft curtain, designed to stop the spread of heat and flame along the underside of the roof, worked as advertised – although the entire interior had smoke damage and required substantial replacement. The pad structure was unaffected by the fire above.

The building was completed in 2002 and still spans the gap created back 1973. It is one of the busiest Walgreen’s in the country. 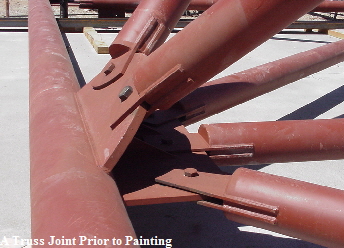 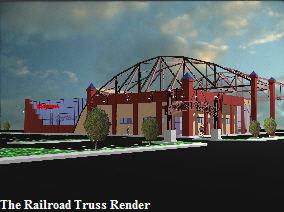 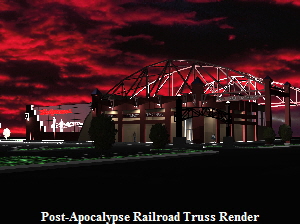 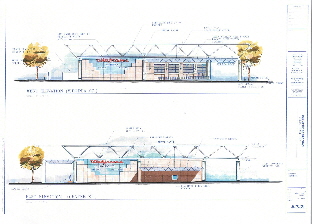 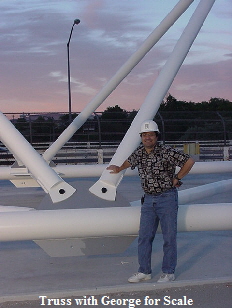 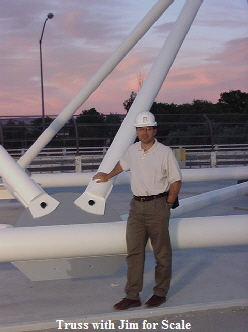 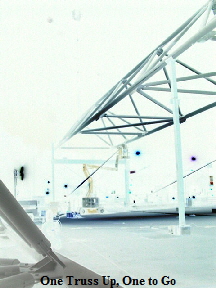 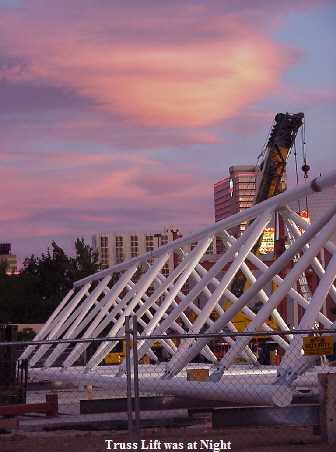